It's a NEW Take on the Vanishing Oatmeal Cookie!!

While browsing the shelves in the baking department, I ran across Hershey's Cinnamon Chips.  Humm....what could I make with those??  The first thing that popped into my mind was Oatmeal Cookies and I headed to the recipe file to find the Vanishing Oatmeal Cookie recipe on the Quaker Box.   Grabbed the recipe and made a few changes, including removing the raisins and adding the Cinnamon Chips and chopped Pecans. 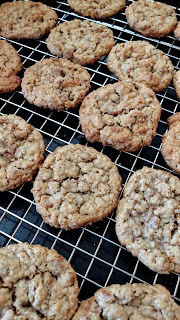 This is the original off the box recipe.

My Life and Times

View my complete profile
The Fine Art of Cooking involves personal choice. Many preferences, ingredients, and procedures may not be consistent with what you know to be true. As with any recipe, you may find your personal intervention will be necessary -- © WHStoneman 2022